BP Bottom Kills the Well from Hell; But Which Well Did They Really Kill, And Is It Really Dead?

Posted on September 26, 2010 by Site Administrator 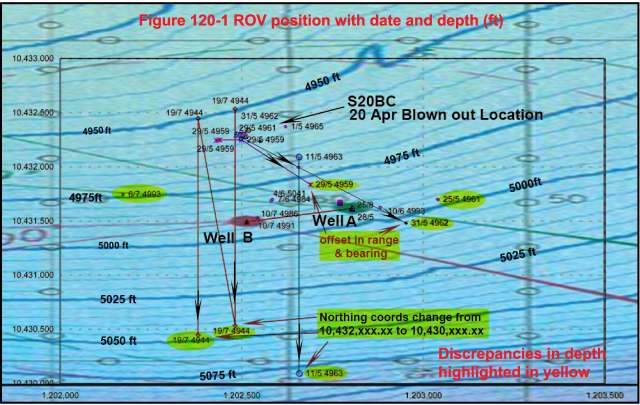 With a final shot of cement, BP Plc permanently “killed” its deep-sea well in the Gulf of Mexico that ruptured in April and unleashed the worst oil spill in U.S. history, the top U.S. spill official said on Sunday.

Some 153 days after the Macondo well ruptured, the U.S. government confirmed that BP had succeeded in drilling a relief well nearly 18,000 feet below the ocean surface and permanently sealing the well with cement.

“The Macondo 252 well is effectively dead,” retired Coast Guard Admiral Thad Allen, who has overseen the U.S. government’s response, said in a statement. “We can now state, definitively, that the Macondo well poses no continuing threat to the Gulf of Mexico.”

A hollow victory speech indeed as even those who reported the official news do not really believe in the “good news” themselves. How credible can such a claim be, given the many lies that had been exposed? Could this “permanent killing” of the zombie well have been so simple and so fast to kill, all along? If it was, why had there been so much hesitation with so many postponements before this? Why could this “permanent killing” not be done sooner? Although the wish for a quick and permanent solution to this disaster is universal, it is just wishful thinking that such a disastrous runaway gushing well could be tamed so easily. But how are we to judge in the absence of verifiable technical data that BP holds so close to heart?

The answer is quite simple actually. The recently announced “permanent kill” is a farce and nothing more than a PR stunt.  Otherwise, why was there a need to deceive? Why would there be a need for the crooked ROV coordinates scheme to create a confused picture of the oil and gas seeps and well locations?

The crooked ROV coordinates scheme is another component of BP’s Art of Mass Deception, foiled once again by the lowly bathymetry data. With the final piece of the jigsaw puzzle in place, BP’s cloak of mass deception is as exposed as the Emperor’s invisible golden clothes ( HYPERLINK “http://www.jackherer.com/chapter16.html&#8221; Emperor’s new clothes – from Hans Christian Andersen’s Fairy Tale).

Figure 120-1 shows the plot of some ROVs’ position with the date and water depth. The water depth is obtained by adding the altitude and the depth of the ROV. Figure 120-2 gives the tabulated ROVs’ details extracted from video footage or captured images available in the public domain. If this obvious falsification of data can be found in almost all of the video footage reviewed (picked randomly), there must be a lot more ROV video footage with falsified coordinates.

Video proof of  oil gushing out of casing at S20BC – the unreported third well that blew on 20 April 2010.

This and many other video footage publicly available from mid May till the first week of June, is the video proof of the oil gushing out of a sub-horizontal casing within a crater at S20BC location; the unreported and unapproved third well that blew on 20 April 2010. This is the only well (out of the 3 drilled) that reached the reservoir at 18,303 ft below mudline (bml).

This location was publicly revealed on 13 Aug 2010 in the diagrammatic illustration of the CSI of the  HYPERLINK “http://bklim.newsvine.com/_news/2010/08/14/4884549-dwh-blowout-csi-why-it-could-not-have-happened-as-reported-by-bp-&#8221; Deepwater Horizon Blowout (Why-It-Could-Not-Have-Happened-As-Reported-By-Bp). From the forensic analysis, S20BC location was determined to be approximately 720ft NNW of Well A. The coastguard log confirmed the location 9 days later; giving it a more precise location of 714 ft NNW of well A.

Although the ROV was visibly stationary there was periodic “jumps in the coordinates” either due to errors in reading the coordinates from the video or navigation data noise. The largest distance moved is 45ft in 2 secs (7m/s). Over the 2 minute video, the virtual position variation is 0 to 45 ft. This is the magnitude of random data scatter that can be expected although the physical movement would be much less and much slower than 3 ft/sec (1m/sec or 3.6km/hr). Movement is perceptible even at a low speed of 0.5ft/sec.

Deliberate Shifting of ROV position by applying offset and bearing

In any positioning system there is always some noise scatter. In (1) we established the noise scatter to be less than 50 ft with a fairly noisy ROV video recording. In some stable ROV videos, the noise scatter on the position is much less. Noise by definition should be random. Deliberate human interference either by changing one of the digit in the 7 digit Northing coordinate or by range (distance in feet) and bearing (angle in degrees) input; produces a distinct pattern of change. Most importantly, as there is no actual physical movement of the ROV, the physical attributes such as time, depth, altitude, heading and speed do not change. Although the realistic corresponding variation in these physical attributes can be altered as well, it is more difficult to do this online without a complicated computerized system or programme.

In the 25 seconds video recording (from 15:01:26 to 15:01:51 hrs) on 29 May, the adulterated position of the ROV moved from the vicinity of S20BC (video shows oil gushing out of the sub-horizontal casing) 730 ft to just 248 ft NNW of Well A. See the track for 29/5 4959. The ROV moved at a speed of 1.1 to 17.3 m/s (4 to 62.3 km/h) within this short interval of 25 seconds or a total distance of 483 ft. ROV cannot cruise at 60 km/h through water and still record the same image of the seabed crater with the oil gushing out of the same sub-horizontal casing. The possibility of successive “random noise positions” moving progressively towards Well A is practically zero. The only other possibility is – human intervention by range (distance in feet) and bearing (angle in degrees) input. Even if the coordinates are plotted in isolation, the depth of 4959ft in the video recording would fall short of 30 ft (see point 29/5 4959 at bathy chart).

In the review of a second video (9 seconds long) from 09:43:03 to 09:43:12 hrs on 31 May,  the adulterated position of the ROV moved from the vicinity of S20BC 740 ft NNW to 200 ft SE of Well A. See the track for 31/5 4962. In this track, the Virtual Position of the ROV moved back towards S20BC in the reverse direction; at the same time maintaining the exact heading, depth and altitude. The maximum virtual speed was 260 m/s (936 km/h). Undoubtedly the automatic positioning of the ROVs had been manipulated. For what purpose, you might ask?

An easier method of fudging the ROVs’ position is to change the fourth digit in the 7 digit Northing coordinate. Changing the first to third digits, would plot the ROV position out of range. It would be difficult to recover the true position and prevent the position from jumping erratically if the 5th to 7th digits were manipulated.

It is no accident that the fourth digit was specifically chosen and changed from 0 to 2. It was deliberate and intended to confuse. And confuse it did for if one were to diligently plot all the ROVs’ positions, it would make no sense. But out of the apparent randomness, a forensic pattern did emerge if the ROVs’ positions were superimposed on the bathymetry.

The “correction of 2000ft north” on all the three points confirmed that the original ROVs Northing had been tampered with a 2000ft shift to the south. But apparently the recorded ROV depth and altitude were left unchanged. Perhaps they did not realise anyone would notice the little discrepancy in depth.

With the general bathymetry sloping 3º to 5º southwards, the water depth should increase not decrease. This proves once again the lowest denomination of the exploration world (the lowly Bathy) to be the mightiest of them all ( HYPERLINK “http://bklim.newsvine.com/_news/2010/09/07/5063017-the-little-mole-hill-that-is-really-a-mountain&#8221; The-Little-Mole-Hill-That-Is-Really-A-Mountain).

The two methods of manipulating position data (for whatever reasons) are fairly common practices that had been exposed time and time again, during the many QC review of past geohazards assessments. Many errant survey contractors used them for a variety of reasons. It just means that BP is no better than the errant survey contractors caught manipulating their data. Is it any wonder that disasters like BP’s oil spill occurs?

This entry was posted in Uncategorized. Bookmark the permalink.

23 Responses to BP Bottom Kills the Well from Hell; But Which Well Did They Really Kill, And Is It Really Dead?